The perfect controller for anyone with a one-track mind.

The only thing better than being on a train is being in charge of one, and if you don't have several years to dedicate to learning the art of being a locomotive operator, then train simulator games are the next best thing. There's no shortage of games in this genre, but finding the right hardware to create an authentic experience on the Nintendo Switch for these games can be challenging. Unless you're in Japan, that is.

The latest Densha de Go!! from 2017 was ported to PlayStation 4 and Nintendo Switch in 2020 as Densha de Go!! Hashirou Yamanote Sen, and according to Famitsu Magazine via Kotaku, the first peripheral in 14 years is going on sale for the game.

It's a fairly complex controller outfitted with all manner of buttons, but its primary hardware feature is a one-handed lever equipped with a series of internal gears to change the speed of a train.

Players can learn "intuitive operation" that allows them to concentrate on the screen without looking at their hands, as well as "power acceleration" that allows for a slow but thrilling iterative increase in speed. The controller is probably not intended to be used in other games like Animal Crossing: New Horizons of The Legend of Zelda: Breath of the Wild, unless you want a weird challenge.

The Densha De Go!! Dedicated One Handle Controller For Nintendo Switch will go on sale in August in Japan for 14,850 yen or roughly $134, but there has been no mention of an international release yet. 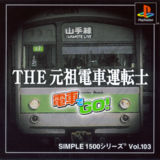