Panzer Dragoon is back.

Panzer Dragoon, a remake of Sega's classic on-rails shooter for was announced for Nintendo Switch during the company's Nintendo Direct briefing at E3 2019. Developed by Forever Entertainment's Megapixel Studio, the newly announced game is a remake of the first Panzer Dragoon, originally released for the Sega Saturn in 1995.

"On a far, lone planet, you encounter two dragons awakened from the ancient times," the game's press release explains. "Armed with a deadly gun from the past, and the guidance of your armored blue dragon, you must fulfill your destiny and keep the Prototype Dragon from reaching the Tower, or die trying." Forever Entertainment promises the game will be true to the 1995 original, with improved graphics and controls placing it more in line with modern gaming standards.

The publisher initially announced its intentions to remake Panzer Dragoon and its sequel back in December 2018. This is the first we've heard of it since then, however, with Panzer Dragoon set to be released for the Nintendo Switch in winter 2019.

The sequel, Panzer Dragoon 2 Zwei, was originally released on the Sega Saturn a year after its predecessor, in 1996. Panzer Dragoon Mini also arrived that year, giving the Game Gear its own take on the series, followed by Panzer Dragoon Saga in 1998. The latter is a fan favorite, gracing the Saturn's twilight years with an RPG many consider to be on par, if not better, than the likes of Final Fantasy VII and Parasite Eve. It's unlikely we'll ever see a remaster of Saga, though, considering Sega reportedly lost the source code for the revered title.

The most recent entry in the series is 2002's Panzer Dragoon Orta for the original Xbox. Greg Kasavin reviewed it for GameSpot, rewarding it a 9/10 and saying, "Overall, Panzer Dragoon Orta is an outstandingly well-executed game, featuring gameplay that's easy to grasp but rewards continued practice, exceptional graphics and sound, a good story, and a lot of worthwhile extras. While the gameplay itself couldn't be called revolutionary, it draws on the conventions that once made shooters the most popular gaming genre in existence and refurbishes them with a few keen, new twists and a terrific presentation. This makes Panzer Dragoon Orta a game that almost any gamer would really like, while those who've kept up with the Panzer series over the years should be especially pleased that the series has evolved this well." You can currently play Orta via backwards compatibility on Xbox One, where you'll also find spiritual successor Crimson Dragon. 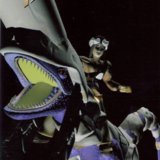