The creepy horror game with animatronic monsters launches on Switch for $30.

Help Wanted is a collection of mini-games from the earlier titles and some new ones that is meant to showcase the "best gameplay across the Five Nights universe."

As usual, you'll be attempting to survive against horrifying animatronic characters in a haunted house of sorts. The game makes use of the Switch's rumble feature to try to scare you even more. Check out the announcement/release trailer below.

Help Wanted originally released in May 2019 for PS4, Xbox One, PC, and Oculus. The Switch edition is developed by Steel Wool Games, and it costs $30. 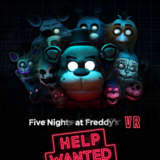