Undoubtedly the biggest surprise to come out of Nintendo's Nindies Summer Showcase last month was Travis Strikes Again, a brand-new installment in the No More Heroes series releasing exclusively for Switch. GameSpot got a chance to sit down with the game's director, the eccentric Suda51, at PAX West and learned some more details about its unique collaborations with other indie games.

Travis Strikes Again isn't a direct continuation of the series, but a spin-off of sorts, taking place seven years after the original No More Heroes. In this title, Travis and Badman are sucked into a "phantom console" called the Death Drive Mk-II, and the two must fight their way through its six different games in order to escape. While specific details haven't been revealed, the game will also feature "a number of collaborations with prominent indie developers;" during its announcement trailer, for instance, Travis could be seen playing Hotline Miami. Suda shed a bit more light on what form these collaborations will take.

"As far as collaborations with other games and stuff goes, well you saw Hotline Miami in the trailer, but basically we're calling it the t-shirt collaboration. Travis is going to be wearing t-shirts of different indie games," Suda explained. "I've been going around the [PAX West] convention, talking to lots of different indie creators, checking out their games, and finding people to collaborate with the t-shirt thing. But that's pretty much all I can comment on as far as the collaboration goes."

As for the different games Travis and Badman will have to clear, it doesn't appear they'll based on other indie games, as was originally speculated. "At this point there's six games that go with this console that Travis will get sucked into and fight his way through these different game worlds, but they're not actually other real indie games," Suda said. "They're pretty much original games each created for this game specifically."

Travis Strikes Again: No More Heroes releases on Switch sometime in 2018. For more, you can check out our full interview with Suda51 soon. In addition to the game's indie collaborations, Suda also discusses his thoughts on how the indie scene has grown and why he feels "fated" to work with Nintendo. 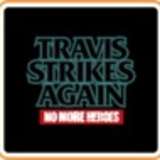