Pick up your Switch, fire up Arms, and help decide who's the best between Spring Man and Ribbon Girl.

The Nintendo Switch exclusive fighting game Arms is holding a brand-new limited-time event just in time for its free trial period on the console-handheld hybrid.

Arms' new LTE is a Party Crash featuring the game's main two stars, Spring Man and Ribbon Girl, and runs from April 2-4. Like previous Party Crashes, the purpose is to score points in-game to see which of the two Arms characters are the most popular.

A new #ARMS Party Crash punches its way to you for another bout! It's a "Battle for Stardom" as Spring Man and Ribbon Girl duke it out! Participate starting tonight 4/2, 11pm PT to 4/4, 11pm PT to help determine who is truly the number 1 ARMS star. pic.twitter.com/NYoXjSGTAK

The last Arms LTE was a Martial Arts Mash-Up Party Crash between Min Min and Ninjara back in June 2019, in which Min Min came out as the fighting game's most popular ninja warrior.

This event comes as Arms' free trial period, which was announced during Nintendo's mini Direct and kicked off on March 26, is still underway. The free-to-download demo is available until April 6 at 11:59 PM PT / 2:59 AM ET / 6:59 AM GMT, and requires a Nintendo Switch Online membership to play.

In other Arms news, Nintendo confirmed that a character from the stretchy fighting game will make an appearance in the company's mega-crossover fighter, Super Smash Bros. Ultimate, this June. While who it is remains a mystery for now, the additional DLC character is the first in the game's Fighter Pass 2. The DLC bundle will retail for $30 USD and all six characters will arrive by December 31, 2021. 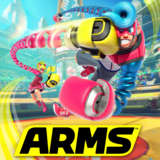