Following the release of Mario + Rabbids: Kingdom Battle, another handful of games has been added to the Nintendo Switch Eshop. This week sees three retro-style action games arrive in the console's digital store.

Also available is the requisite ACA Neo Geo game. This week, it's the 2D arcade shoot-'em-up Zed Blade. Players select an aircraft and blast their way through horizontally-scrolling stages on a quest to stop the rogue space fortress Yggdrasil. Like previous ACA Neo Geo titles, Zed Blade retails for $8/£6.29.

The final new Eshop game available now is League of Evil, an 8-bit platformer originally released for mobile devices. The game challenges players with jumping and punching their way through over 140 levels spread into four chapters. New to the Switch release is a level editor, allowing players to create their own stages and share them with others online. League of Evil runs for $8/£7.19. 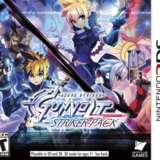