Not for the first time.

Nintendo has re-registered a trademark for its acclaimed 2002 horror title Eternal Darkness.

The application was submitted to the United States Patent and Trademark Office on December 20, 2016, just three weeks before the Nintendo Switch is fully unveiled on January 12 / 13.

The application mentions "downloadable electronic game software," suggesting a virtual console re-release could be on the cards. There's no mention of any platform in the application, but it seems unlikely at this point for the game to be released on Wii U or 3DS and not Switch.

This isn't the first time that Eternal Darkness's trademark has been extended: Nintendo re-registered the game back in 2010, and again in 2013. No re-release has yet materialised, however.

There's also no mention of the successor to Eternal Darkness: Sanity's Requiem, Shadow of the Eternals. The semi-sequel was first teased in 2013, but the failure of its Kickstarter campaign put the project at risk. Creator Denis Dyack claimed in 2016 that the project was still alive, however.

In other Nintendo Switch news, the platform is rumored to be getting a third version of Pokemon Sun and Moon, as well as a new 3D Mario and a port of The Elder Scrolls V: Skyrim. Keep an eye on GameSpot for all the latest news on Nintendo's new platform. 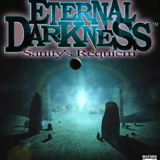