Nintendo's filing for new trademarks of the classic DS games is super effective at getting your hopes up.

Nintendo has filed new trademarks for Pokemon HeartGold and Pokemon SoulSilver, according to listings that were spotted by Japanese Nintendo. HeartGold and SoulSilver were complete remakes of the 2001 Gold and Silver games, first appearing on the Nintendo DS a decade ago.

While the trademarks do cover 50 different types of products and services related to HeartGold and SoulSilver, there's no mention of a new re-release of those classic games in them.

Japanese trademark rights expire ten years from the day on which it as registered, and seeing as how Pokemon HeartGold and Pokemon SoulSilver were first released in Japan in 2009 and then in the rest of the world in 2010, this is likely a case of Nintendo protecting its intellectual property.

It's also doubtful that HeartGold and SoulSilver will be ported to the Nintendo 3DS like the original Pokemon games were, now that the console has been officially discontinued. If you do happen to own a physical version of the original DS carts, you'll still be able to play them on that handheld console though.

Currently the Pokemon library on Nintendo Switch includes Pokemon Let's Go Pikachu and Let's Go Eevee, remakes of 1998's Pokemon Yellow. This was followed up in November 2019 by Pokemon Sword and Shield, which introduced the eighth generation of the franchise on the Switch. 2020 has seen the Pokemon franchise make use of an expansion pass for Sword and Shield, which broadened the Galar region in June's Isle of Armor and will expand further in The Crown Tundra later this year. 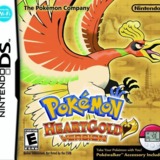