Nintendo has added several of its best-selling N64 games to its Player's Choice line of products. Donkey Kong 64, Super Smash Bros., Pokémon Stadium, Pokémon Snap, and Perfect Dark will be available for the new suggested retail price of US$39.95 beginning December 26. All five games have sold more than 1 million units each, and they'll join such titles as The Legend of Zelda: Ocarina in Time and GoldenEye 007 in the company's Player's Choice line.

"We're proud to add more top-notch titles to our Player's Choice line," said Peter Main, Nintendo's executive vice president of sales and marketing for Nintendo of America. "Not only are these games among the best interactive titles ever created, but now they're also among the best values our industry has ever offered." 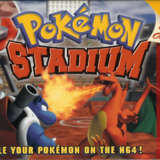