The Virtual Boy is back.

Nintendo has revealed its latest Labo set, the VR Kit, and it's perhaps the most significant one yet. While the basic conceit of using cardboard to transform the Nintendo Switch into something else remains, in this case, it's used to turn the system into a virtual reality headset. The new Toy-Con--as Labo kits are called--launches on April 12, and it includes new minigames as well as additional physical cardboard to make the VR headset.

Nintendo says the new kit "encourages passing around Toy-Con creations among a group of people so everyone in the room can easily join in on the fun." The company continues: "To help encourage this social gameplay, players simply slip the Nintendo Switch console into the Toy-Con VR Goggles and hold it up to their eyes to explore numerous games and experiences--no head-strap needed."

Now Playing: What An 8 Year-Old Thinks Of Nintendo Labo

The new Toy-Con is available in two configurations: the complete VR Kit set includes the Switch software and materials to build all six Labo VR projects--VR Goggles, Blaster, Camera, Bird, Wind Pedal, and Elephant. The VR Starter Set, meanwhile, includes the Switch software, but only the materials needed to build the VR Goggles and Blaster. Both sets also include a safety cap and screen holder, for people who prefer to play the minigames in traditional 2D. Those who buy the Starter Set can then complete their collection later on by purchasing two expansions--one including the Elephant and Camera, the other including the Wind Pedal and Bird.

In The US, the VR Kit is priced at $80, while the Starter Set + Blaster kit goes for $40. Owners of the latter can pick up the two VR Kit expansions for $20 each.

Nintendo has dabbled in VR once before, with the 1995 release of its short-lived Virtual Boy system. The console was a head-mounted device that brought an early form of virtual reality into people's homes; it suffered from poor commercial performance, however, so was discontinued just a year after launch. Nintendo Labo, meanwhile, first launched in April 2018, and we awarded the first kit a 7/10. For more information on the first set, check out our Nintendo Labo Variety Kit review. 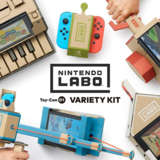