The New Nintendo 2DS XL isn't that easy to find now, but Walmart has a bundle with Mario Kart 7 for just $100.

For the past few months, the Nintendo Switch has been extremely difficult to find. The coronavirus pandemic has caused a stock shortage, and interest in the console has jumped due to people spending more time at home. While you may have been aware of that already, we're guessing less people know that the New Nintendo 2DS XL is also fairly challenging to find. As the only remaining model from the 3DS family of systems in production, the New Nintendo 2DS XL will likely soon only be available through third-party resellers. However, Walmart currently has the black and turquoise New Nintendo 2DS XL with Mario Kart 7 pre-loaded for only $100, which is $50 off its list price. 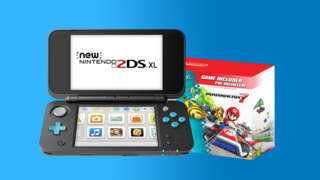 Walmart has had this model in and out of stock for the past couple of months, and it's the only New 2DS XL available at major retailers. The fact that it's also on sale for a stellar price makes this deal worth paying attention to, especially if you've never owned a 3DS or have young kids. It's also worth noting that Ebay sellers regularly list the New Nintendo 2DS XL for right around $150 and sometimes more.

Yes, it is true that the 3DS--the 2DS plays the same games, just not in 3D--is now a dated handheld. It's been a dated handheld for years now, frankly, and new 3DS games aren't being developed. But it's also true that the 3DS has an incredible back catalog of great games--a library that gets far more robust when you consider that the New Nintendo 2DS XL also plays regular DS games.

Both the 3DS and DS proved to be ridiculously popular, which means that finding games is still really easy. Plus, you can get a bunch of first-party exclusives for cheap. GameStop has The Legend of Zelda: Link Between Worlds, Super Mario 3D Land, The Legend of Zelda: Ocarina of Time 3D, Donkey Kong Country Returns 3D, Super Smash Bros., and more for under $20 each.

The New Nintendo 2DS XL also offers the best form factor of any of the systems in the 3DS family, so if you never upgraded to an XL, now's a great time to do so. The $100 price would be a bargain even if the great Mario Kart 7 wasn't included.