We take flight for a first look at the dreamy world of NiGHTS: Journey of Dreams.

If you were a fan of the original NiGHTS game released on the Sega Saturn back in 1996, your dreams may soon come true in more ways than one. Sega's upcoming Wii exclusive, NiGHTS: Journey of Dreams will not only resurrect the acclaimed series after an 11-year hiatus, but it's also designed specifically around the concept of dreams. We sat in on a presentation from Sega to learn exactly how the theme of dreams will once again be applied to NiGHTS in Journey of Dreams.

The presentation was light on actual details; instead, it explained the concept behind this new game. The game goes so far as to draw parallels between the world of NiGHTS and the dream theory developed by influential Swiss psychiatrist Carl Jung. There are seven dream worlds to fly through in Journey of Dreams, divided among the colorful and idyllic realm of Nightopia and the dark and sinister realm of Nightmare.

The first world shown in the demo was a lush area, where NiGHTS is pictured soaring over sparkling waterfalls, flying alongside schools of tropical fish, diving between huge bubbles, and darting through narrow tunnels of rock. The gameplay footage we saw was kept brief, but it showed NiGHTS traveling a set path, going through rings, and generally just flying about as in the original NiGHTS game.

The darker side of the game takes place in the Nightmare realm, where you'll encounter the game's bosses. Little was revealed about this world, but we did get a glimpse and a brief description of one of the boss stages. The idea is to have boss stages that play out differently than the usual combat-focused boss stages. The example given was a huge, patchwork jester-looking boss that behaves like a giant rubber ball. It's your job to bounce the boss through a maze and get him to the top of a tower. Very little information was given beyond that, and we didn't get to see much of the battle in motion, but if nothing else it seems like the bosses in Journey of Dreams could be an interesting change of pace from the typical boss encounters in other games.

Of course, since it is a Wii game, you'll control NiGHTS by moving the Wii Remote. The exact control scheme hasn't been revealed yet, but the game will include a hybrid control option for those who prefer to use analog control.

Based on what we've seen of the game, it looks like NiGHTS: Journey of Dreams is sticking closely to the original game by focusing on flight and fantasy. We'll bring you more information over the coming months, but for now you can take a look at the first from the game on our gamespace. NiGHTS: Journey of Dreams is scheduled to be released this fall. 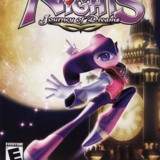