Like most things from 1997, the CGI-animated Donkey Kong Country TV series is a fascinating and horrifying glimpse at the past. Currently airing on Amazon Freevee and on YouTube--both ad supported--you can relive the horrors of '90s CGI, if you're brave enough. No one knows how it returned, but experts have hypothesized that a combination of someone wishing for new Donkey Kong content and a curled finger on a wish-granting monkey's paw is likely to blame.

If you're interested--or masochistic--you can tune into Amazon Freevee through this link and subject yourself to all 40 episodes. Don't say that we didn't warn you though. Alternatively, playlists for Season 1 and Season 2 can be found on YouTube.

Officially debuting in France first and then a year later in the US, Donkey Kong Country stars the musclehead ape as the protector of Kongo Bongo Island and the magical Crystal Coconut, which is regularly under threat from King K. Rool and his minions. Donkey is joined by members of the Kong family, and each episode tortured its viewers with songs that the main cast performed.

Like most CGI-animated episodes of the time, the animation is downright primitive when compared to today's standards. But unlike similar shows such as ReBoot or Beast Wars, Donkey Kong Country looked visually disturbing as each character model consisted of lifeless eyes, unnatural movement, and fur textures that looked like they had been carved directly into the flesh of the cast.

In the video game department, the last major appearance for the ape wonder of the world was in Donkey Kong Country: Tropical Freeze for Wii U in 2014, which was ported to the Switch in 2018. Donkey Kong also appeared as a playable character in Super Smash Bros. Ultimate alongside King K. Rool.

While a new Donkey Kong game looks unlikely right now, Nintendo Switch owners can prepare for a bumper Q4 as Bayonetta 3 will land on the console in late October and will be followed by Pokemon Scarlet and Violet in November. 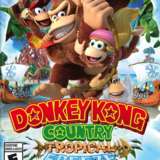