The 40-year-old actress commented, "I love the concept that Nintendo is reaching out to new audiences with their self improvement products like Brain Training. Most importantly, I've quickly found that training my brain is a great way to keep my mind feeling young."

The advert will feature the star relaxing at home and playing the new title by memorising numbers and speaking into the DS's microphone. The ad will debut in the UK on ITV1 at 7:45 p.m.

"Who Wants to be a Millionaire" presenter Chris Tarrant was the previous celebrity to publicise the (first) title, Dr. Kawashima's Brain Training: How Old Is Your Brain? , in a series of ads in the UK--including one with his then wife, Ingrid, where he started using the game after forgetting his wedding anniversary. Unfortunately, the couple was going through a well-publicised divorce at the time, after the tabloids revealed the star had been having an affair.

For more information on More Brain Training from Dr. Kawashima: How Old Is Your Brain, check out GameSpot's hands-on preview. 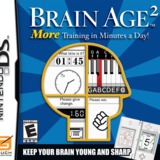