Sources say Level-5 International America and Abby have been running on fumes since 2019.

It looks like Level-5, developer of Yo-Kai Watch and Ni No Kuni, has basically shut down its North American operations, as reported by GamesIndustry.biz.

According to multiple sources informed on the matter, both Level-5 International America and its subsidiary office Level-5 Abby started shuttering last year, including laying off the majority of each office's staff. The actual numbers on how many folks were impacted and how many remain are still unclear, but sources estimate about ten employees were laid off from Abby and a similar amount were let go from International America.

Though sources say there was no explicit reason given for the layoffs, those connected to Abby reported that employees were given "every indication" that the studio would be shutting down, with a few employees lingering to finish up essential functions while the company wrapped its consolidation between the Japan office and Dentsu, an international branding and advertisement company.

In July 2019, Level-5 International America confirmed it was closing its design department, laying off two employees. At the time it claimed this would not be part of a larger restructuring.

Currently, Level-5 has not announced any plans for what the future of its games will look like in North America. One source suggested that there are currently no plans to release any Level-5 games outside of Japan. The details on previously announced Western releases, like a localization of Yo-Kai Watch 4, have ceased as well, and Level-5's social media accounts have largely been inactive aside from an announcement in July that a bug in Layton Brothers Mystery Room had been fixed. 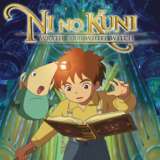 Ni no Kuni: Wrath of the White Witch
Follow
$28.68 on Walmart
Buy