989 Sports will be showing off NHL FaceOff 2005 for the first time at this year's E3 2004. The game marks the return of an ice hockey franchise that hasn't seen a new iteration since 2002's Faceoff 2003. 989 is hoping that the extra time put into the development of FaceOff 2005 will help it overcome the issues that have kept the series from being a real contender in the hockey market in the past.

One of the primary new graphics features of FaceOff 2005 is the detailed facial animations mapped to all of the players. If you're not particularly fond of the player faces, the game will let you use an EyeToy camera to capture your own visage and import it into the game. Extensive create-a-player and create-a-team options will also be included for further customization possibilities. While true-to-life re-creations of real-life arenas are considered a given in today's sports games, the developers at Page 44 Studios have gone a little further, promising stadium-specific player intros, player-specific chants, and unique goal horns.

NHL FaceOff 2005 offers a number of different game modes, including an interesting rivalry mode. Rivalry is designed for two players to choose their favorite matchup and then record lifetime stats, custom settings, and more. A franchise mode allows you to control the fate of a team through the regular season, playoffs, and into the offseason and subsequent seasons. You'll need to worry about drafting new blood, negotiating contracts with current players, and trading players with other teams. The tournament mode lets you set up 32 team tournaments in a variety of formats such as round robin and single or double elimination. FaceOff 2005 will also offer robust online functionality with head-to-head matches, 64-player tournaments, and downloadable roster updates. The game will even include a special World Cup hockey mode, which will allow you to go into international competition between countries such as Canada, the United States, Russia, the Czech Republic, Finland, Sweden, and more.

NHL FaceOff 2005 is currently slated to ship this fall for the PlayStation 2 platform. Stay tuned to GameSpot for further information on this game as it becomes available. 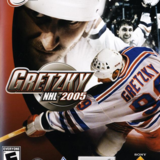