Retail price of 2K Games' latest could be slashed like an NHLPA member's salary.

After NHL 2K5's successful outing at the budget price of $19.99, the latest iteration of 2K Games' hockey franchise has been preordering at various retailers for $29.99. But the days of cheap pucks aren't necessarily a thing of the past, as EBgames.com updated its listings for the PlayStation 2 and Xbox versions of the game with slick new cover art featuring Dallas Stars goaltender Marty Turco and a slicker new price of $19.99. The preorder price for the Xbox 360 version of the game remains at $59.99.

Additions to this year's game include NHL rule changes instituted during the lockout-lengthened offseason, on-the-fly coaching, optional icon-based passing, and an enforcer system that gives even the most cement-handed of goonish fourth-liners the ability to intimidate the opposition's superstars.

A 2K Games representative would not confirm the price for GameSpot, stating that the company has not announced a price for the game as yet. NHL 2K6 is rated E10+ for Everyone 10 and Older and is slated to ship in early September. For more on the game, check out GameSpot's hands-on impressions. 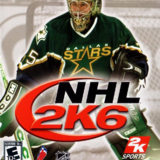