It's now August, which means that EA will soon launch its annual sports games, such as NHL 18. However, before it is officially released, you can try out NHL 18 for free: the game's beta test went live today for all players on PS4 and Xbox One.

The beta is free to download and includes a few modes that'll be in the final game. Most notably, the beta features NHL Threes, a new mode that is meant to be more arcade-y than the rest of the game. According to EA, Threes focuses on "bigger hits, faster gameplay, and highlight-reel goals through fun three-on-three matches." It supports both online and local multiplayer.

In the full game, Threes will also feature a single-player campaign mode that tasks you with completing regional circuits and challenges. This mode isn't available in the beta.

The beta also features a traditional online versus mode. This mode consists of normal six-on-six matches, and you can try out the changes and additions that EA has added to the gameplay.

Finally, the beta includes EA Sports Hockey League, a mode that focuses on your ability to play as a team with other players. This year's Hockey League supports both six-on-six and three-on-three matches.

You can try out the beta until August 8. NHL 18 officially launches on September 15 for Xbox One and PS4, and it'll feature Connor McDavid as its cover athlete. 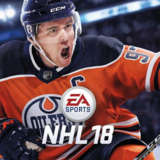