NHL 17 is still a couple months away, but EA Sports has released a new trailer that lets us know what we can expect from the upcoming hockey game. It sounds like every major aspect of the game has been improved at least a little bit, with improved goalie stances, defensive positioning, and offensive pushes. You can watch it for yourself in the video above.

The trailer starts with defending from action in front of the net, where defenders will have more tools to clear the puck and keep opposing players from screening the goalie. The hit targeting has also been improved, which is said to make defending neutral ice more effective. On top of that, goalies now have more than 40 stances, which are intended to make each goalie in the league feel unique and authentic.

Offense has also received some improvements to passing, picking up the puck, and skating. It will now be easier for players to get into dangerous positions that make it easier for them to take advantage of angles and score. The trailer shows a player spinning away from his check to get open and another pushing off a defender to tip the puck into the net. Additionally, players will have more than 30 new celebrations to take advantage of when they score--one of these has the player doing pushups on the ice.

A beta for NHL 17 was announced at the 2016 NHL Awards. Signups have closed, but if you already registered, you'll have access to NHL 17's Online Versus, HUT, and EASHL modes from July 28 to August 4.

The cover star for this year's hockey game was revealed as St. Louis Blues winger Vladimir Tarasenko. He beat out the San Jose Sharks' Joe Pavelski, whose team beat the Blues to go on to the Stanley Cup Finals in May. The Sharks ended up losing to the Pittsburgh Penguins in Game 6.

EA Canada vice president Matt Bilbey and EA Tiburon vice president Cam Weber recently discussed what it would take to bring more of EA's sports games back to PC. The only EA Sports franchise that still releases on the platform is the FIFA series. 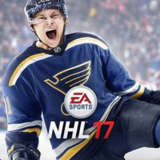