Before I get into what&#39;s new with NHL 10, I&#39;ve got two quick stories about the EA Sports Hockey League which was introduced in last year&#39;s NHL 09:As recently as two weeks ago, I was still receiving requests from folks wanting an invite to be on GameSpot&#39;s official EASHL team, the... 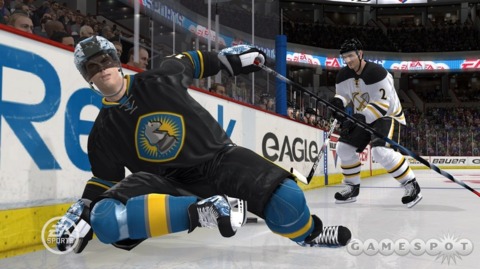 Before I get into what's new with NHL 10, I've got two quick stories about the EA Sports Hockey League which was introduced in last year's NHL 09:

The above stories are just two examples of what has made the EASHL such a huge hit since its debut; the complete focus on making the game's players the stars (as opposed to the pros on the cover); and, perhaps more importantly, the idea of fostering an esprit de corps among players who are determined to make their team the best. If you're not impressed by the spirit of the EASHL, perhaps some numbers will convince you: According to series producer David Littman, NHL 09 reached platinum status for worldwide sales (including more than 775,000 units sold in the U.S. alone) and, of that impressive sales number, approximately 400,000 people participated in at least one EASHL game. When you add that 100,000 teams registered in last year's league, you've got a huge chunk of EASHL players.

Littman hopes those numbers increase significantly in NHL 10. To accomplish that goal, the NHL development team is focusing on improving aspects of the EASHL across the board. First and foremost is the idea of changing up how the league works in order to improve the competition. How the EASHL is organized this year is going to make a big difference in how you play it and, ultimately, your chances for success.

"What we're going to do [this year] is have monthly seasons. That all comes from just the fact that it's tough to get 40 guys to stay together for an entire year and not really play other games. We don't want other people to never play other games. And if you have a league where all that matters is how often you play...because winning percentage is part of our leaderboards [as well as] how often you play...if you only play 10 games, you can't be in the top of the leaderboard-- it's impossible. So we found teams were playing thousands of games and splitting off from each other, where a club might have two or three games being played at a time. And people kind of feel like they're not on the same team.

"So with monthly seasons, you have that bond on your team of, 'OK, we're going to win this month. We're going to win the EA Sports Hockey League this month.' I think a month is a great amount of time to have people stay together and play all the time. Maybe not every night, but a few nights a week...and be able to stay together to win that championship. And so at the end of the month...the season's over." 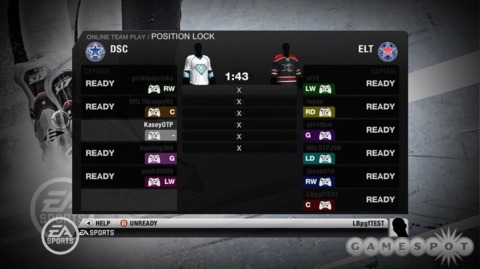 Monthly seasons will compact your EASHL campaign into bite-sized chunks. It will also offer the added benefit of letting folks who come to the game late (after, say, getting the game at Christmas) a chance to compete for the Cup during the next month's season. The addition of "casual" and "pro" leagues is another big switch. Though the two leagues are ostensibly identical--in that you can choose to enter your team in either skill division--the NHL team is guessing that the hardcore NHL fans will gravitate toward the higher skill of competition in the pro division, with incentives that will include more significant prizes for pro division winners than those found in the casual division. That said, your team will earn medals for finishing in the top percentages of your division, and all of your earned trophies and medals will be displayed on a brand new trophy screen.

With the obvious problem of elite teams joining casual league games and mowing down the competition, Littman said that the team--acting as league commissioner--could choose to intervene with disciplinary action in such a case. Still, for those with the skill, the as-yet-unnamed rewards for winning the pro division will hopefully make this kind of grief a minor issue.

According to Littman, NHL 10 is looking to be many things to many people. At its core, it's a sports game. Yet, it also has elements of fighting games (thanks to the new first-person fighting engine). The GM mode can be seen as a management-style game, and the EASHL and Be a Pro modes are distinctly influenced by role-playing games and massively multiplayer online games, such as World of Warcraft and the like. One particularly obvious manifestation of the RPG influence is found via equipment upgrade in NHL 10.

A hockey shop has been added to NHL 10, where you'll be able to unlock new equipment by either performing well on the ice or paying out of pocket. New equipment includes sticks, skates, gloves, and helmets. In addition to having lots of different styles to choose from--the camouflage gear is particularly strange considering you're playing on ice--this unlocked equipment will include slots to which you can attach attribute bonuses. Unlocking the green camouflage skates requires you to be promoted to the first line of your NHL team as a forward, and these skates accept attribute upgrades for ratings, such as aggressiveness, agility, speed, and more. Similarly, your sticks will include slots for improving ratings, such as face-offs, slap-shot accuracy and power, and wrist-shot accuracy and power. You can change attributes on slotted equipment at any time, though the game will also include gold equipment packages that come with maximum attributes on them--these are packages for each player type and the packages cannot be changed.

Slotted equipment should be a boon for fans who want to quickly progress their players, but my question to Littman had to do with the realism of such a system. Did he feel that this kind of artificial player boost would jibe well with the NHL's simlike gameplay?

"Real life is very similar," Littman said. "I played pro hockey for 10 years, and believe me, you get the best equipment in the world. And when, you know, you look at the sticks players use nowadays, and even if you're an amateur skating at your local rink, I guarantee you the player that bought the $300, you know, composite stick that's super light and has the perfect whip to it is getting a harder shot than the guy who uses an old wood stick.

"Now, new equipment isn't going to make a superstar. You can't be Gretzky if you're not Gretzky. But you can make yourself a bit better by having new equipment. You know, goalies [it's the] same thing. When I was young, gloves were super heavy, pads were super heavy. When I was younger, I wore the leather pads that had deerskin--or deer hair in it. When those got wet, you were dragging about 15 pounds on each leg, man.

"Just like in our game, this isn't going to make you 99 across the board in everything; this is just a way to make you five, six, seven points better than you would have if you didn't wear this equipment."

Late last year, I wrote a post in this blog with ideas on improving the EASHL. Among my complaints were such things as improving online league organization, improving the interface for inviting team members, and including more variety when it comes to creating your EASHL team. Thanks to the monthly seasons and the split divisions, the league structure has improved. When it comes to more variety, the team has taken another step in the right direction by adding 20 to 30 new jerseys. 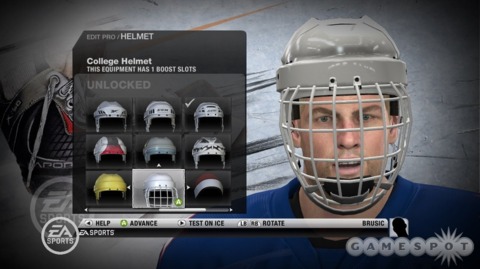 With the success of the Teambuilder system in NCAA Football 10, could we see a similar feature in next year's NHL game? Littman said that they'd like it to be part of the game next year but wasn't willing to commit any further. Personally, it seems like an obvious choice for NHL 11. After all, the whole point of the EASHL is creating your team's individual identity in the game--one that doesn't necessarily have to have any ties to reality. A Teambuilder feature would be an ideal way to make that happen.

My biggest pet peeve from last year's EASHL implementation was the process of adding team members. It was tedious and took far too long, especially when adding those not on your friends list. Thanks to a new club campus screen, those problems look to be behind us. Players can easily request to join a certain club, and you will even be able to scout players on other teams via a dedicated scouting screen that shows you a list of teams and players you've recently played against. From there, you can find the player you're looking for and directly send him an invite to join your team.

Yesterday, I played a couple of EASHL games with fellow game writers and the NHL 10 development team, and I had a good time playing as a defenseman. I even managed to score an overtime win with a slap shot from the point. As with last year's game, the pace of EASHL games is slightly slower than that in the main game or in the Be a Pro mode, but it certainly didn't take away from the fun. Communication between teammates is still the key, as is making sure that you're playing your role on the ice, and not just zipping to the puck whenever it's free.

In many ways, EA Sports hit the nail on the head with the EA Sports Hockey League. Despite initial connection hiccups, the feature worked like a charm right from the get-go, and it will be interesting to see how this feature evolves in the coming years.

So, is it too early to call for sign-ups for the Xnmnk Mockobckars? 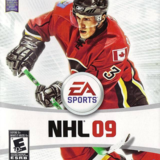