With the fervor of the men's Olympic hockey tournament still blazing in my veins, I fired up NHL 10 on Sunday night and dove into the Be a Pro mode for a nice long stretch. The next thing I knew, it was after midnight, my created left winger had made the first line of my minor league team (the Hershey Bears), and I was nearly halfway through my team's season. Along the way, I started thinking about how sports games dangle the carrot in front of players' eyes.

My very first game back in NHL 10--after weeks of playing other games--was a revelation on ice for my created player. He was a flash of maroon and white, racking up three assists and a gorgeous one-timer goal in a lopsided 6-0 victory against a division opponent. It was by far the best I'd played since owning NHL 10, and I wasn't exactly sure how much of that success was due to Olympic inspiration, blind luck, or some other cause.

It was that single game's effort, after all, that got me promoted to the first line--for which I rewarded my team with a string of subsequently mediocre performances, a few goals and assists here and there, and at least one game where I racked up three back-to-back interference penalties (which I still think are called too frequently in the game).

Despite spending experience points to upgrade my player's attributes, my uneven play continued throughout my session with the game. So what, then, was going on in that game where I could seemingly do no wrong? Was it simply the fact that I had been away from NHL 10 for a while and that absence had given me a clearer vision of what I needed to accomplish on the ice? Was I just in the right frame of mind when I began--I tend to get antsy when playing sports games--and my performance suffered as my anxiety increased? Or maybe the game is just screwing with me. Perhaps a line in the code flipped a switch and decided that, at least for one game, my NHL 10 Be a Pro would be playing like an American version of Alex Ovechkin.

Whatever the cause, I can say that I had more fun in that one stellar performance than I've had in the entirety of my mediocre NHL 10 career so far. And I'm not sure how I feel about that. On one hand, a great night on the ice feels that much better, simply because I've struggled for so long. On the other, half the reason I previously gave up on NHL 10 (and on NHL 09's career mode, and gave up on my created pitcher in MLB 09: The Show) is simply because those great performances were too few and far between.

Granted, this is early in my career, and it can only get better. I've got more experience points to earn, more attributes to grow, and presumably more goals and assists to rack up. Still, even once my player gets called up to the NHL, I'll be a little fish in a big pond. Perhaps those infrequent golden performances are NHL 10's method of keeping me into the game while I continue to work on my player and my skills. But I have to wonder if the occasional taste of being Alex Ovechkin is enough reward for spending the majority of my time being David Steckel. 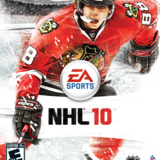