We sit down with the latest entry in the long-lived EA Sports' NHL series. PlayStation 2 owners, you're in for a surprise...

While fans of real hockey are celebrating the ever-nearing possibility of an end to the lockout that killed the 2004/2005 NHL season, hockey gamers are confident knowing that whatever the outcome of the labor negotiations, they'll still have puck games to play. This evening, we had a chance to check out EA Sports' latest iteration of its long-running hockey series, NHL 06, a game that contains one big surprise, at least for PlayStation 2 owners. Before we give that away, however, let's talk about some of the gameplay tweaks that will find their ways into the game when it's released later this year.

The most obvious addition to the NHL 06 roster of features is the skill stick, a mechanic that continues EA Sports' trend of making more-prominent use of the right analog stick on the PS2, Xbox, and GameCube controllers in its sports games. Whereas other games have mixed up the right analog stick for use on both offense and defense, the skill stick in NHL 06 is used purely for scoring purposes. Scoring with style, that is. When your controlled player is in the offensive zone, you'll be able to pull off one of several flashy moves with a simple flick of the analog stick. The types of shots you'll attempt using these controls read like a laundry list of SportsCenter NHL highlight reels: spin-a-roonies, between the legs, toe drags, even kicking the puck up to the stick with your skate and putting it in the net. By tossing in the trigger buttons, you're even able to attempt even fancier shots, such as batting it into the goal in midair.

Of course, the key word here is "attempt" when using the skill stick. Sure, these shots look great when they work, but you'll want to use them judiciously, or else the opposing defenseman will make you look silly. In addition, skill-stick shots are only available to certain players on your team. Just as you won't see Tie Domi attempting a lacrosse shot while skating backward in a real game, he won't be able to use skill-stick shots in NHL 06. Instead, the offense powerhouses--the Joe Sakics, Paul Kariyas, and Mats Sundins of the league--will be the only ones capable of these special shots. If you're playing a team with which you aren't familiar, you'll immediately know who's a star by the handy blue star icon that appears beneath the player. "But what about the star defensemen?" you ask. Big-time players on defense, such as Adam Foote and Sergei Gonchar, will be noted as stars in the game, so they'll have access to the skill-stick move set. However, their move sets will be dramatically less effective. In the end, if you want to keep your scoring up, it'll be best to get the puck on the sticks of your shooters.

Another noticeable control tweak in NHL 06 is the ability to deke from side to side, manually, using the left analog stick (similar to how you did it way back in NHL 94 on the Sega Genesis). It's a noticeable improvement right off the bat, and it makes you wonder why it ever went away in the first place. Also, an improved shot-aiming system borrows a page from Gretzky NHL 2005 through the implementation of a target that appears on the net that you can manually move to aim your shot. In the hands of a skilled player, use of the skill stick (to get the goalie to bite on a fake) combined with the aimed-shot mechanic (to take advantage of the now out-of-position goalie) will be a deadly duo.

According to NHL producers, 06's artificially intelligent opponents have received a boost this time around. On offense, your players will be more mindful of their positioning relative to the play you call on the ice, and they'll do a better job of getting themselves in position to set up for crucial one-timer goals. On the other side of the ice, defenseman are less eager to lay you out and will instead more closely guard you and play a more positional style of defense. They'll basically try harder to wrest control of the puck from you rather than simply bash your head into the wall and skate off. While it's too early to judge the effectiveness of the AI, based on the limited amount of time we had with the game, we definitely did see a decrease in defensive hits, a problem that plagued last year's game and basically prevented you from mounting any sort of offense.

A create-a-player feature will give you more options than ever before for creating exactly the kind of look you want for your hockey alter ego. Using both analog sticks, similar to the way Fight Night 2's create-a-player works, you'll be able to adjust everything from chin size to nose width. You'll even be able to equip him with licensed equipment from brands such as Bauer Vapor XXX, Sherwood Solid Gold, and Easton Synergy, among others. The player models themselves don't look nearly as detailed as the ones found in Fight Night, but since this is a hockey game, they probably don't need to. Still, the ability to add bruises and scars to your virtual player should prove to be a fun touch, especially for those who enjoy modes like this.

Over in dynasty mode, you'll still be taking the reins of your favorite team in NHL 06, and you'll be subjected to the varying whims of an owner who's intent on specific goals for the franchise. New this year is the ability to take a created team and then play it in dynasty mode. In fact, you can even take a created team and place it in the Swedish Elite League, so you can deal those dirty Scandinavians a whoopin' they'll never forget. As GM, you'll be responsible for not only the financial health of your organization, but also for your play on the ice. In NHL 06, you'll be able to schedule practices for your team on a weekly basis. You won't be able to get down to the nitty-gritty level of assigning routines for individual players, though. Instead you'll choose from a number of preset practice types that will apply to the entire team. How hard you work your players will depend on how healthy they are, as well as their standing in their division, among other factors.

As you progress through a season, you'll be able to keep a close eye on your team on a game-by-game basis, especially on games you sim. Should you not like what you're seeing on the ice, you'll be able to intervene at any point in the simulation to take over the game personally. You'll be playing for more than team pride at this point, however, because the monetary rewards for winning a game when you're down can be substantial. In fact, the later in the game you take over, and the further back you come from behind, the more money your GM will award you should you lead your team to victory. Then you can take those winnings and pour them right back into the team to hire a new strength coach, for example.

Now for the surprise you've been waiting for. Careful readers may be able to guess what it is, as it was hinted to earlier in the article. If not, here it is: The PS2 version of NHL 06 will include a fully playable version of the old Sega Genesis classic, NHL 94. We saw the game in action, and, yep, it sure did look like NHL 94, all the way down to the aqua-colored ice and the blobby-looking player models. It's hard to think that, at one point, we thought games like this looked incredibly good. Anyway, the inclusion of NHL 94 is a nice gesture for fans of the NHL series who always hearken back to that installment as a classic in the series. Unfortunately, Xbox owners will be out of luck when it comes to NHL 94, because the game will only be included on the PS2 version of NHL 06. So what do Xbox owners get with their copies of NHL 06? According to producers, they get some upgraded graphics...and that's about it. So make your choice accordingly.

After a disappointing entry in the series last year, will NHL 06 once again right the hockey ship and set the franchise back on a steady course? We'll know more once the game is released later this year. Until then, stay tuned for our continued coverage of the game in the coming months. 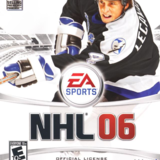