We try out the PlayStation 2 version of EA Sports Big football game.

Once upon a time, arcade-style gameplay ruled all. It didn't matter what alleged genre you were playing because back in the day most games amounted to pressing one or two buttons--max. Video games basically kept things fun and simple. However, that simplicity has been slowly phased out as more complex gameplay has come into fashion. One of the best examples of a franchise that's changed with the times has been Midway's NFL Blitz, which was once a happy marriage of modern graphics and simple gameplay but has now shifted to a more simulation-style focus. The series' shift has left a definite gap in the football genre's "arcade" slot, which brings us to the latest multiplatform entry in EA Sports Big's line, NFL Street. The fast-paced game was announced earlier this year and appeared to be poised to offer a unique experience that, while not quite as "arcadelike" as the Blitz franchise, was along the same lines as EA's slick NBA Street games. We recently had the chance to try out a preview version of the PlayStation 2 game, and it seems as though it's coming together quite well.

NFL Street sticks pretty close to the template used by NBA Street with one notable-- and welcome--addition: online play. You'll find four main game options in NFL Street: quick game, pickup game, NFL challenge, and online. Quick game throws you into a game against a friend or the AI after just a few button presses. You'll just have to pick teams and decide which field to play on. There are eight fields from which to choose. Pickup game is a more involved mode that's a throwback to PE or playground games. Here you pick a team roster from a pool of current NFL players and legends (once they've been unlocked). There are roughly 300 current players and legends included in the game, which ensures that you'll be pretty busy trying to get them all. If, for some reason, the roster doesn't float your boat, you'll be able to create your own custom team--right down to the logo and color scheme. You'll also be able to trick-out players with performance-enhancing gear.

NFL Challenge is a series of matches on different fields against different NFL teams. You'll earn development points that you can use to build up your team, or you'll earn challenge tokens that you can use to unlock content in the game. You'll have two match choices on each field: challenge mode or ladder. Challenge mode features several different matchups that present unique requirements--such as performing specific moves or winning by a certain number of points in a set number of plays--that you'll have to complete in order to clear them. The game is slated to feature more than 200 unique challenges, which should keep most players busy for a while. The ladder mode features a series of matches that you'll have to progress through to unlock a new series for competition. Additionally, you'll earn tokens to use in the game, and the online mode lets you make use of the standard EA Sports Talk features, as found in the latest batch of online games (provided you have a USB headset handy). Furthermore, you'll find such extras as behind-the-scenes footage, a tutorial, and a jukebox to play around with.

The game's mechanics keep things tight and accessible. You'll select seven players from an available pool of 10 to 12. Each player is rated according to a variety of stats, such as passing, speed, blocking, agility, catching, run power, tackling, and coverage. Players will obviously be more proficient in the abilities that relate to their positions. However, all players will play both offense and defense, so you'll want to pick a balanced group of offensive and defensive players.

NFL Street's controls are a stripped-down variation of the classic Madden controls and include basic power-move buttons, called "style" moves in the game, for both offense and defense. There's also a turbo-boost button. The style moves are flashy taunts that are performed by a combination of the L1 button and a face button on the controller. They give you additional style points, depending on how many you execute in a row before the play ends (much like in NBA Street's mechanics). Players' have signature style moves that can be performed by pressing L2 and the right analog stick as well. The one hitch to the flashy moves is that you'll have to be careful, since your player is more prone to fumbling the ball if you're brought down. The style moves are essential to filling up your gamebreaker meter--another gameplay element carried over from NFL Street. Once the meter is full, you can trigger the move by pressing the circle button before the snap of the ball. Depending on whether you're on offense or defense, your respective side will become nearly unstoppable until you lose possession of the ball. For example, offensive players become nearly impossible to tackle, and their various dodges and jukes become far more effective. The playbooks in the game are modest--although a bit thin when compared to Madden. However, they work fine in the context of the game. The selection of traditional plays is beefed-up some by more trick plays. For instance, there are halfback passes and double reverses, which all help to provide a solid play experience.

The game's graphics are coming together well, as a whole, although there's some shimmer to the proceedings. This shimmer mainly comes from the backgrounds, and it could stand some additional smoothing. However, that said, the graphics still look quite sharp. The characters look quite good and use an exaggerated style that's equal parts NBA Street and Def Jam Vendetta. However, players are still recognizable, thanks to the lack of helmets and traditional gear. The game's eight environments are large and detailed, and they feature nice touches, like lighting and particle effects, to set the atmosphere.

The game's audio features a good mix of EA Trax tunes, ambient chatter from the players, and sound effects. The team chatter offers a good mix of trash talk that is pretty accurate for describing what's happening on the field. The sound effects are very satisfying, especially the impacts and sounds used to highlight the style and gamebreaker moves.

From what we've seen so far, NFL Street is shaping up pretty well. The game features a nice arcadelike experience that looks as though it may offer a winning mix of arcade-style gameplay from old-school games and modern elements, such as character customization and unlockables. NFL Street is currently slated to ship early next year for the PlayStation 2, GameCube, and Xbox. The PlayStation 2 game is the only version slated to include online play. 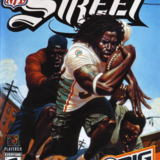