Midway is taking its football series more seriously this year, but that doesn't make the latest game a simulation.

Midway's long-running NFL Blitz football series has always been fun, but Midway has become increasingly concerned that true football fans aren't taking it seriously. That's why this year's Blitz trades in many of the old games' more outlandish rules in favor of something that's a bit truer to NFL football, without sacrificing the gameplay that the Blitz series is known for.

These rule changes mean that first downs now require 10 yards instead of 30. A full 11-man team will be on either side of the ball, and you'll even have to kick your own extra points now, rather than letting the automatic kicker handle your business. But while the game may be shooting for a slightly more authentic depiction of the sport of football, that doesn't mean you'll be seeing penalties or anything crazy like that. As far as gameplay goes, NFL Blitz Pro appears to stick pretty closely to the formula, letting you dive into receivers well before the ball even touches their fingertips. Like the more recent console versions of Blitz, the game contains an icon-based passing system. The play-calling menus have been redesigned as well, and they currently look and function a bit like the Madden play-calling system. New tackle animations have been added, and you can also hit both triggers to execute a quick backward step, which is helpful for dodging dives. The game's sidelines have been filled with characters, so you'll be able to dump over tubs full of Gatorade, dive headfirst into cheerleaders, and knock over benches full of reserve players.

While the game will be available on all three current-generation console platforms, only the PlayStation 2 version will feature the game's extensive, tournament-based online mode. While all the logistics haven't been worked out at this time, the plan is for the game's online mode to keep track of lots of different stats in various offensive and defensive categories, as well as information about player streaks, disconnects, and other relevant information. The top players in standard online play will move up to a more elite tournament mode, and games and tournaments will continue until a top player has been established. The game will feature downloadable weather for each of the real-life NFL stadiums, so when you play a game in rainy Detroit, you can bet that it's really raining in Detroit at that moment.

A new two-man commentary team will come in to handle the play-by-play in a similar fashion to Midway's other recent sports game, MLB Slugfest. NFL Blitz Pro is currently scheduled to hit store shelves for the PlayStation 2, Xbox, and GameCube in early September. 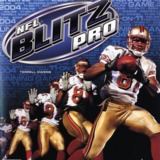