Next Xbox One Backwards-Compatible Game Revealed

Criterion Games has confirmed that its critically acclaimed 2008 racing game Burnout Paradise will be playable on Xbox One through backwards compatibility. The UK-based developer made the announcement on Twitter in an exchange with a fan, but said players will need to stay tuned for an official release date.

This news isn't altogether surprising, as Criterion said in July that it was working with Microsoft to add the game to the Xbox One's backwards compatibility lineup.

Backwards compatibility for Xbox 360 titles is currently available on Xbox One for Preview Program members only. However, it won't be long until the feature is rolled out for everyone, as the update it's included with--New Xbox One Experience--is set to arrive in November.

At that time, more than 100 games will be supported through backwards compatibility (see the lineup of confirmed titles so far here), while more will be added thereafter.

For more on Burnout Paradise, check out GameSpot's review. Looking ahead, Criterion is working on an untitled extreme sports game that was first shown at E3 2014. 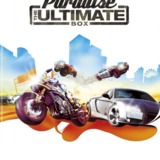