Assassin's Creed Memories is a card battling RPG that explores new areas the console and PC games have yet to feature.

When fans requested that the next Assassin's Creed game be set in Feudal Japan, this probably isn't what they meant. Ubisoft announced that Assassin's Creed Memories is available for free starting today on the iOS app store (no word on Android). According to the game's listing, it combines "card battle, RPG, and strategy gameplay" as well as "20 vs. 20 Guild vs. Guild combat."

But the most interesting inclusion in this new title are the new locations. In card-battling form, you'll be able to visit two locations that haven't come to the main series yet: Feudal Japan and Imperial Mongolia.

But what do you think about this lastest addition to the Assassin's Creed family? Even if you're not sold on card games, at the very least it's free, but do you want to see Ubisoft continue to experiment with bringing the franchise to these new genres? Tell us your thoughts in the comments below! 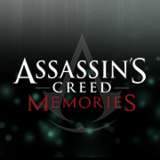