Images from Konami event in Japan reveal company at work on new iteration in action franchise under the working title "Enders Project."

A new Zone of the Enders game was announced today during a Konami special event in Japan, according to tweets from an animator in attendance (via Kotaku). The game is currently in development under the working title "Enders Project."

Other details on the project are not available, and as of press time, Konami had not responded to GameSpot's request for comment. 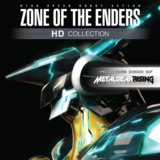 Zone of the Enders HD Collection
Follow
$83.52 on Amazon
Buy