Nintendo has announced two new 3DS hand-held consoles coming to the U.S. this fall. The New Nintendo 3DS will launch on September 25 and a Hyrule Edition New Nintendo 3DS XL will be released on October 30.

The Hyrule Edition New Nintendo 3DS XL will be released exclusively at GameStop stores with a suggested retail price of $199.99. The system will be gold-coloured and feature the Hylian Crest on its front. The hand-held console comes just after the release of The Legend of Zelda: Tri Force Heroes, which is scheduled for launch on October 23.

Animal Crossing: Happy Home Designer will launch on September 25. The game supports the use of select Amiibo cards, which will introduce new characters to the game when tapped on. Animal Crossing Amiibo card packs will be released on the same day. The Hyrule Edition 3DS XL is not the only themed 3DS revealed by Nintendo as of late. Earlier this year a Monster Hunter X-themed New 3DS XL was unveiled, although the console is exclusive to Japan.

Check out some images of the New Nintendo 3DS Animal Crossing: Happy Home Designer bundle below. 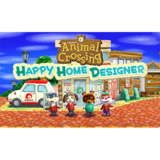