Contra: Rogue Corps and Nascar Heat 4 are also on sale this weekend.

Another weekend means another set of Xbox One games to play for free as part of Microsoft's Free Play Days. This crop of titles is geared towards adrenaline junkies with Contra: Rogue Corps and Nascar Heat 4 both being available for Xbox Live Gold and Xbox Game Pass Ultimate subscribers.

Xbox's director of programming, Larry "Major Nelson" Hryb, announced on Twitter that the two games are available from today, November 14, to Sunday, November 17. All you need is an active Xbox Live Gold or Game Pass Ultimate membership to download and play them for free.

Nascar Heat 4 is the latest entry in the simulation racing franchise based on the 2019 Nascar circuit. The game was developed by Monster Games and launched on September 13 for PC, PlayStation 4, and Xbox One. Nascar Heat 4 has garnered a fairly lukewarm reception and received generally middling reviews since its release.

Contra: Rogue Corps also launched in September and is the latest entry in Konami's mainline Contra series since 2007's Contra 4. The game made its way to Nintendo Switch, PC, PlayStation 4, and Xbox One on September 24. Rogue Corps has been pretty divisive since launch and received relatively negative reviews across all platforms. 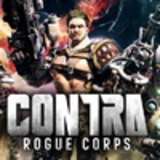