New Unreal Tournament in development, and it'll be absolutely free

Epic Games confirms it has started work on next entry in the classic shooter series; coming to Windows, Linux, and Mac; runs on Unreal Engine 4.

Epic Games announced today that is has started work on an all-new Unreal Tournament game. Interestingly, the Unreal Engine 4-powered game will be entirely free when it's released. Not free-to-play, completely free, Epic Games said. A "small core team" is currently working on the game, which is coming to Windows, Linux, and Mac.

Epic Games cautioned that it will take "many months" until the studio has a build of the game that's playable. "This is real development from scratch," the company says.

"We'll eventually create a marketplace where developers, modders, artists, and gamers can give away, buy, and sell mods and content. Earnings from the marketplace will be split between the mod/content developer, and Epic," Epic Games said. "That's how we plan to pay for the game."

"A lot of this is brand new for Epic, and we don't yet have everything figured out. Things will probably definitely go wrong from time to time, and when they do, we'll have to work through them together. There will be a lot of tough decisions to make, and not every feature will make it into the game. But if you're a fan of Unreal Tournament, a UE4 developer, or a future modder--or if you just want to learn how we make games--we hope you'll join us. It's going to be fun."

You can read more about the new Unreal Tournament game at its newly launched Wiki page and Unreal Engine 4 forums. 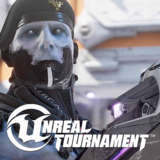