New Too Human Screens and Info

Too Human, a new 3D role-playing game from Silicon Knights, will officially be unveiled at next week's Electronic Entertainment Expo, but we've got the first word on some of the game's details. Set in 2450 AD, Too Human is a futuristic psychological thriller that has you contemplate the effects of genetics, prosthetics, and the struggle of humankind to deal with the symbiosis of man and machine. By letting the player cybernetically enhance his own strength and invulnerability, Too Human will provide a unique twist on the action RPG genre.Silicon Knights is claiming that Too Human will feature more than 80 hours of gameplay, along with 60 minutes of cinematics; the game will span four CD-ROMs. Stay tuned to videogames.com next week for additional screens and details from E3. 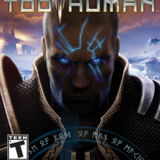