Following some initial reports, developer Greg Johnson and his studio Humanature on Wednesday officially announced that a new ToeJam and Earl game is in development. It's suitably titled ToeJam and Earl: Back in the Groove, and Johnson--co creator of the franchise--is crowdfunding the project through Kickstarter. He's seeking $400,000 to bring the project to life.

Johnson, one of the original ToeJam and Earl designers, is working on Back in the Groove with a "very small indie team" consisting of three other developers, he explained. The team has self-funded the game so far, and hopes to release the game on its own--without a publisher--so that "we can build the game we want to make."

Should funding for Back in the Groove come in strong, the team may grow in size. But Johnson said it's his hope that the developer can stay relatively small, totaling no more than than eight or nine employees.

Johnson co-owns the ToeJam and Earl franchise with Mark Voorsanger, who is not working on Back in the Groove. Early games in the series were licensed to Sega, and Johnson said he remains in a "good relationship" with the company as it related to the series.

"Hopefully there will be some synergy between this and the older products that they are still selling digitally," he said.

As for why Johnson and his team are choosing to bring ToeJam and Earl back now, he said there has recently been a surge in interest for retro games. Indeed, GameSpot has been eagerly awaiting a new ToeJam and Earl game for years now.

"There has been an outpouring of fan requests for a new ToeJam and Earl game in the last few years," Johnson said. "I've wanted to make a new game for years."

Back in the Groove is being built using the Unity engine, and Johnson said he hopes to release the title across as many platforms as possible. He promised: "There won't be any exclusivity." That said, Johnson and company are devoting all of their energy at first to building the game for PC (as well as Mac and Linux) before porting it to other systems.

In terms of gameplay, Johnson said Back in the Groove is being made for fans of the ToeJam and Earl series. As such, you can expect it to have buttons, coin meters, hidden presents, and possibly even a Hyperfunk Zone if funding allows.

"I also have a list of new game features planned, but overall we're keeping it old school, with stacked random levels, simple controls, 2D sprites in a retro art style, and a largely-fixed isometric camera," he said.

In terms of new features and elements, Back in the Groove will include the following:

Johnson cautioned that Back in the Groove is still "so early in development," so the developer does not yet have a finalized list of new gameplay elements. In addition, some of the new features will depend on whether stretch goals are met.

So when will Back in the Groove be finished? Johnson wouldn't commit to a launch date, saying it will depend on what resources the developer has to work with. He explained that one of the benefits to working independently is that you have more freedom to do things your own way.

"Our priority happens to be making the best game we can," he said. "You often will hear this from publishers, but the reality is that if this is really your priority, then you don't release the game until it's ready."

Johnson also pledged to remain in constant communication with backers in an effort to keep supporters in the loop regarding the development status of Back in the Groove. This last point is especially noteworthy given the broken promises controversy surrounding Peter Molyneux's crowdfunded game, Godus.

The original ToeJam & Earl was released for the Sega Genesis back in 1991. This was followed up by a 1993 platforming sequel called Panic in Funkotron, and then ToeJam & Earl III: Mission to Earth in 2002.

For more on Back in the Groove, check out the image gallery below. 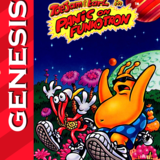