Coming from Crema and Humble Bundle, the creature-collecting adventure game Temtem pulls a lot of influences from Nintendo's immensely popular Pokemon series. Still, it injects an online twist to give it its own flair As a massively-multiplayer online game, you'll start in a setting known as the Airborne Archipelago, a collection of six floating islands with different terrain and wildlife, and embark on an adventure with other explorers to catch magical creatures known as temtem. In this exclusive new trailer, we get to see the three starter temtem that you can choose from, who can eventually grow into formidable members of your roster.

After creating your custom protagonist, who you can deck out with new costumes and accessories, you get to pick your starting temtem to accompany you on your journey. In the new trailer, we get a solid rundown of each of the three starters, which detail their strengths and weaknesses.

Here's a brief explainer on each one:

After picking a starting temtem, your protagonist--a temtem tamer in training--will be able to explore the six islands of the archipelago. Throughout your journey, you'll come to blows with Clan Belsoto, who are seeking to control the six islands for themselves. While exploring, you'll be able to battle other tamers, level up your party, and capture new temtem to expand your roster.

All this sounds very familiar when thinking of the Pokemon series, but what makes Temtem stand on its own is that it all takes place within an online world where other players will be making a go of it on their journey. In addition to battling NPC characters, you'll also be able to test your skills against other players online. But if you want to stick with the story, then you can still play through the game solo, or even with a friend and go through the entire campaign cooperatively.

As of this time, Temtem is planned for a PC release on Steam on January 21, but according to developer Crema, they're looking into releasing the game on Playstation 4, Xbox One, and Nintendo Switch at a later period. During the early access period, the developers will continue adding new content after launch. 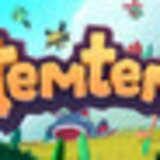