Nearly every one of the 283 episodes of South Park that has aired over the last 20 years started out with an identical disclaimer. If you're ever tuned in before the show's intro, you know the one: the white-text-on-black-background message warning people of poor impressions and foul language, punctuated with the statement, "Due to its content, it should not be viewed by anyone." With the release of the franchise's new mobile game, South Park: Phone Destroyer, we now have a new version of that disclaimer.

Phone Destroyer, which was revealed back at E3, is out now worldwide on iOS and Android. Before you get into the action, however, you're presented with a familiar sight--albeit with a few differences to account for this being a free-to-play, microtransaction-based game.

"This game contains both in-app purchases and the option to watch ads for rewards," it reads. "To disable the ability to make in-app purchases, adjust your device settings. In-app purchases cost real money and are charged to your account and for those reasons, this game should not be played anyone."

Phone Destroyer was developed by RedLynx, the studio best known for the Trials series. This game bears little resemblance to that series; it's a collectible card-based real-time strategy game where you'll do battle by summoning various South Park characters using cards. As in publisher Ubisoft's South Park console games, you play as the New Kid as you work your way through a single-player campaign. There's also a PvP mode where you can use the cards you've unlocked to compete against other players. 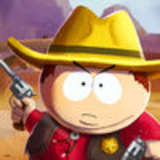