Kanye isn't going to be happy.

It's been a long wait for the game, but South Park: The Fractured But Whole has finally gone gold, meaning it's ready to begin being manufactured ahead of its release in October. To mark the occasion, Ubisoft has released a new trailer which--while innocuous on the surface--cracks a joke at the expense of Kanye West and his upcoming video game.

As seen above, the trailer focuses on a talking, chain-wearing gay fish character and his mother. The fish enlists the help of the player's character to ensure the fish's mother gets into heaven; this unfolds through a sequence that's reminiscent of both Flappy Bird and Robot Unicorn Attack. This seems harmless enough, though there are references you may not put together if you aren't caught up on the show or your latest Kanye West game development news.

The fish character is a callback to the Season 13 episode of South Park called "Fishsticks," which originally aired in 2009. In it, the show parodies a song of West's and refers to him as a gay fish. Additionally, remember back to last year, when West revealed the first details and footage of his in-development video game, Only One: The Game, which features his mother (who passed away in 2007) riding to heaven on a unicorn.

If the similarities weren't obvious enough, we know that South Park creators Trey Parker and Matt Stone are aware of the connection. During Ubisoft's E3 2016 press conference, they described this scenario from the game. Parker punctuated this by saying, "Y'all just be acting like this s*** is regular," which is precisely what West said when he first showed off his game.

It's no surprise that a South Park game is touching on controversial subjects. Surprisingly, it will not be censored in regions like Australia, as The Stick of Truth was. The Fractured But Whole releases for PS4, Xbox One, and PC on October 17. 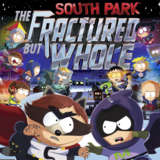 South Park: The Fractured But Whole
Follow
$29.99 on Gamestop
Buy