TOKYO--On its official Web site, Square Enix says it is seeking employees for a new Seiken Densetsu title. The recruitment page hosts two concept illustrations but does not give explicit details on the project.

Square Enix did not discuss a platform for the new title. The last Seiken Densetsu game, Shinyaku Seiken Densetsu, was released in 2003 for the GBA. That game was a remake of the original 1991 Game Boy title that kicked off the Seiken Densetsu series. 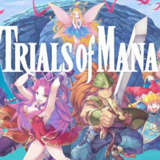