Namco reveals that a new Ridge Racer game is in the works and that MotoGP 3 will be released in Japan early next year.

According to GameSpot Japan, Namco commented at today's Tokyo CG Festival on its upcoming driving games, MotoGP 3 and a new Ridge Racer game. Namco didn't specify which platforms the new Ridge Racer game is for, but has previously said it was for the GameCube. The game will be released in Japan in the summer of 2003.

It was also mentioned that MotoGP3 is scheduled for release in Japan in January 2003. 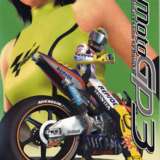