Activision and Raven Software release new information and media on the long-awaited shooter.

Publisher Activision and developer Raven Software have finally released a new information update and one new screenshot for Quake 4, the next game in the well-known shooter series. The update includes more details on the stroggs, the monstrous aliens that players originally encountered in 1997's Quake II. According to the new information provided by Raven Software project lead Eric Biessman, the alien aggressors will return in Quake 4 in a full-scale war between a squadron of soldiers:

Earth is under siege by an alien race. The Strogg are cybernetic warriors--a mechanical frame and decaying body parts stabilized by flesh consumed in a systematic annihilation of other species and civilizations. In a desperate attempt to survive a Strogg attack on Earth, an armada of Earth's finest warriors is sent to take the battle to the Strogg home planet. Earth's initial assault force is nearly annihilated immediately, but one marine manages to infiltrate the base, bring down their planetary defense systems, and kill the Strogg's collective brain and leader--the Makron. Earth assumed the destruction of the Makron would end it all, but it didn't.

That's where Quake II leaves off and Quake 4 begins.

The Strogg are quickly regrouping. However, with the Strogg's planetary defenses still destroyed, Earth's forces can deliver a full and final assault. This time, you're not alone. You are Matthew Kane, an elite member of Rhino Squad, and part of Earth's next invasion wave. An army of soldiers are fighting with you and an arsenal of weapons and vehicles are at your disposal in this heroic and epic battle between worlds."

Quake 4 has been in development for some time at Raven Software, a longtime collaborator with Activision and id Software on such games as Jedi Knight II: Jedi Outcast and the Soldier of Fortune series. No official release date has been confirmed at this time. Check back with GameSpot for future updates. 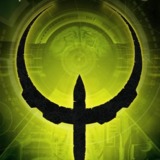