Deep discounts on a host of PSVR games run until September 8.

The PlayStation Store is currently selling a whole host of PlayStation VR games at a deep discount for a limited time. Though the next generation of PSVR is likely still a few years away, it might not hurt to stock up on some titles now. PSVR is also compatible with PS5.

The sale runs until September 8, with PS Plus members scoring additional discounts on select titles. Some notable games on sale include Astro Bot Rescue Mission at 50% off as well as Ubisoft's party game Werewolves Within (which recently got a film adaptation) for 70% off. Other highlights include VR versions of games like Doom 3, L.A. Noire, and Borderlands 2, which are each 50% off. Sadly, Moss, which will be getting a VR-exclusive sequel, is not on sale.

See all deals on PSN 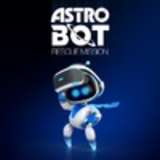