Project Gotham Racing 2 fans will soon have some new cars to park in their garage. A forum post on the Web site of Bizarre Creations, the game's developer, revealed today that a second "booster pack" for the game will be available for download soon on Xbox Live.

According to the post, the pack will feature eight tracks inside the new city of Long Beach, California. "Middle-of-the-road dividers, abrupt elevation changes, long sweeping straights and kudos-generating hairpins turn this into one of the most varied, rewarding and challenging cities in the PGR series," read the post, which mentioned Long Beach landmarks such as the Convention Center, the Westin, and the famously sunbathed Ocean Drive.

The post also revealed that the expansion pack, the second for the game, will feature eight new cars, including the:

Ariel Atom 2: A lightweight, open-wheeled car that couples the Honda Type-R engine with a superlightweight frame and rear-wheel drive control.

Dodge RAM SRT-10: This American truck is powered by an 8.3-liter Viper engine and can go over 150mph.

The Long Beach update is the second booster pack for Project Gotham Racing 2, following a Paris update this past May. That update cost $4.99 to download, and early reports say its sequel will bear the same sticker price. 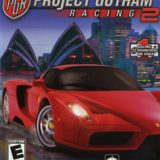