Nintendo has announced that new Pokemon characters will be introduced Pokken Tournament DX, the Nintendo Switch fighting game, through upcoming DLC. The Deluxe Battle Pack was announced during its surprise Nintendo Direct and is available to purchase now.

New content will become available to those that purchase it in two waves, with the first arriving on January 31. This initial wave will include Aegislash as a new fighter and Mega Rayquaza and Mimikyu as support characters. This will be followed by the second wave of content on March 23, with Blastoise being added as a new playable fighter. Mew and Celebi will also be included as support characters. Nintendo is also giving a new selection of avatar items to those that purchase the Deluxe Battle Pack now.

Pokken Tournament was originally released for the Wii U. In the original Pokken Tournament review, GameSpot awarded it a 9/10. "Nintendo's Wii U provides a paucity of fighting games, but Pokken Tournament has redeemed that drought by being one of the best on any platform," reads the review. "Frequently magnificent to look at, delicately designed, and rewarding for players across all skill levels, it's the Pokemon fighting game deserving of a 20-year wait."

During the surprise Nintendo Direct a number of other big announcements were made. These include free Super Mario Odyssey DLC and a Dark Souls remaster for Switch. For more, check out our roundup of all the new Nintendo Switch games announced here and you can also watch the full Nintendo Direct here. All of our coverage is outlined below. 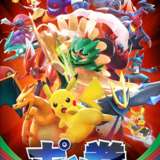