New Pokemon Snap is out now on Nintendo Switch, and in it, you'll explore a vast array of beautiful environments and capture photos of many cute Pokemon doing adorable things. So it's only natural that many players will want to bring their in-game photography to life and print their best New Pokemon Snap photos. Fortunately, Nintendo has teamed up with Fujifilm to make it possible to print photos from your Switch, but there are a few things you need to make that happen.

Before you can print your New Pokemon Snap photos--or any Nintendo Switch screenshots--you will need a printer and an app. The Fujifilm Instax Mini Link is a smartphone printer with Bluetooth capabilities, and it's compatible with Nintendo Switch. However, you'll also need to download the Instax Mini Link app for Nintendo Switch, which released on the Apple App Store and Google Play on April 30 alongside the game.

Where to buy a printer for Nintendo Switch

Buying the printer and film for it will be the hardest part of this entire process. A special-edition Fujifilm Instax Mini Link for Nintendo Switch released on April 30 for $100 and comes in a brand-new color: Ash White (Red & Blue). If you're willing to wait a little longer, a bundle is releasing in late May that includes the new Ash White (Red & Blue) printer and a super-cute silicone Pikachu case. The bundle will cost you $120. Right now, the special-edition printer is available via Amazon--though the listing says "temporarily out of stock," you can still add the printer to your cart and checkout to secure your order. You'll be emailed when there's an estimated delivery date and won't be charged until the item ships. 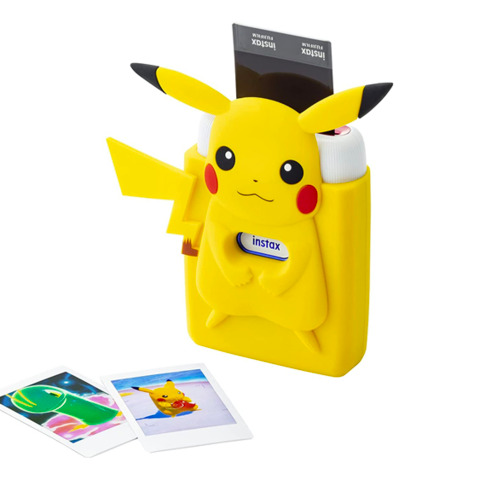 This adorable bundle gets you the special-edition Ash White (Red & Blue) printer with a Pikachu-themed case. It'll be available in late May for $120, and we've seen preorders pop up for it a few times at Amazon, only to sell out near-instantly. This is a hot-ticket item that's going to be very difficult to get your hands on, but it's worth keeping an eye on the listing for surprise restocks.

Meanwhile, you can already buy the Ash White (Red & Blue) printer separately for $100. The only difference here is you don't get the Pikachu case.

If you miss out on the Ash White (Red & Blue) special edition, you're not out of luck. Any of Fujifilm's Instax Mini Link smartphone printers will work just fine for printing Nintendo Switch photos, and they come in a few different shades, including Dark Denim, Dusty Pink, and plain Ash White. However, even the regular Instax Mini Link printers are starting to go out of stock at most stores, and since New Pokemon Snap has launched, it's become even harder to find them. So if you don't want to take your chances or can't secure the special bundle, it's not a bad idea to snag any Instax Mini Link printer you can find in stock--you can always pick up a cute case for it later. Plus, don't forget to grab film for your printer, as that's likely to become hard to find or more expensive in the coming weeks as well. Amazon has a 20-film pack on sale for $13 right now.

Once you have your printer and some film for it, you'll be able to print any screenshots off your Nintendo Switch, whether it's photos from New Pokemon Snap or screenshots from other games like Animal Crossing: New Horizons and Super Mario 3D World + Bowser's Fury. After you have the printer, you can follow these steps to print Nintendo Switch photos:

And that's it--printing photos from your Nintendo Switch will bring some of your favorite in-game moments to life. Though you'll be able to do some light editing in the Instax Mini Link App, keep in mind that New Pokemon Snap offers even more options for editing and putting your personal touch on saved photos in-game, so you can get your favorite images looking snappy before you even send them to print.