Pokemon Duel is a new free-to-play board game for mobile.

Out of nowhere, a new Pokemon game released today on iOS and Android.

Called Pokemon Duel, it's a free-to-play strategy board game for mobile. It was released in Japan as Pokemon Comaster in 2016, but has only now been released in English.

Pokemon Duel doesn't contain the same rock-paper-scissors combat as the mainline games. Instead, it's a turn-based board game in which you move Pokemon counters to the opponent's side of the arena. Clashes between friendly and enemy counters result in a duelling mini-game.

Duel does, however, retain the collectible element of other Pokemon games. Using in-game currency, you can unlock chests containing new Pokemon counters for use in battle.

In other Pokemon news, a new Pikachu-themed 3DS is coming to the US, Nintendo has announced. This follows the hugely successful launch of Pokemon Sun and Moon in 2016, and the summer hit Pokemon Go.

Nintendo will launch a new console, the Switch, in March. It lets users play games at home and on the go, but Nintendo believes the Switch and the 3DS can successfully coexist. A new Pokemon game, codenamed Stars, is rumored to be in development for the hybrid console. 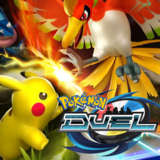