In celebration of Pac-Man's 40th anniversary, Hasbro has released a new version of Monopoly that sounds pretty darn cool. The Monopoly Arcade Pac-Man Game comes with a tiny arcade cabinet that serves as the central mechanic for this new spin on Monopoly. It released earlier this month and is available at Amazon, Walmart, and Target for $30. It's currently sold out at Target and backordered at Amazon, but you can still snag a copy at Walmart.

This version of Monopoly fittingly revolves around points rather than money. Each turn, two to four competitors move their player icon and the Ghost Token, with each movement tied to a die. The objective is to rack up points as you race around the board and accumulate Levels, all the while avoiding the Ghost. 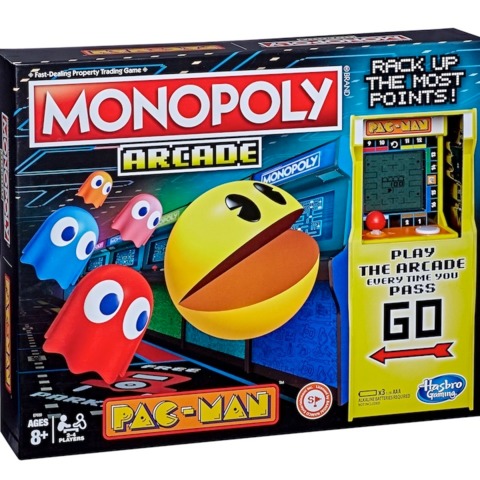 This new take on Monopoly releases August 1 for $30.

Each time you pass or land on Go, you get to play Pac-Man on the arcade unit to add points to your total score. The game comes with four plastic coins, one for each player, that when dropped into the cabinet pull up the various menu options. For instance, the arcade cabinet also acts as the bank, keeping track of each player's points as well as giving you an opportunity to buy, sell, or even steal Levels from other players. The player with the most points at the end of the game wins.

Pac-Man Monopoly isn't available for purchase just yet, but it should be live at major retailers soon.

Hasbro's new Pac-Man Monopoly board game is just one of the new Pac-Man products released for the classic mascot's 40th anniversary. The Geek Store has a lineup of merch, including a neat quarter arcade cabinet. Arcade1Up also released a gorgeous 40th Anniversary edition Pac-Man cabinet loaded with seven games.

Hasbro is also releasing a new version of Super Mario Monopoly on August 1, and it's available to purchase now at Amazon for $30.