One of the Nintendo Switch's best controller makers has just revealed its new fight stick, which also works on PC.

The Nintendo Switch is home to some fantastic fighting games, including Street Fighter: 30th Anniversary Collection and Mortal Kombat 11, and now it's getting a brand new fight stick. 8Bitdo is known for its retro-style controllers, and it revealed its first fight stick. The 8Bitdo arcade stick costs $90 and features Bluetooth, 2.4GHz wireless, and wired USB-C connection modes. The fight stick releases on October 20, and if you're interested in picking it up, you can pre-order it from Amazon right now.

The 8Bitdo arcade stick works with both Nintendo Switch and PC and is compatible with 8Bitdo's button remapping software. You can flip between Switch and PC modes on the fly, and while this serves a functional purpose, it's also represented visually. The stick displays its button designations right above or below the buttons, and when you switch modes, the mappings will change. For example, RT and LT replace ZR and ZL respectively, while the face buttons swap places from the Switch's layout to their positioning on an Xbox One controller. 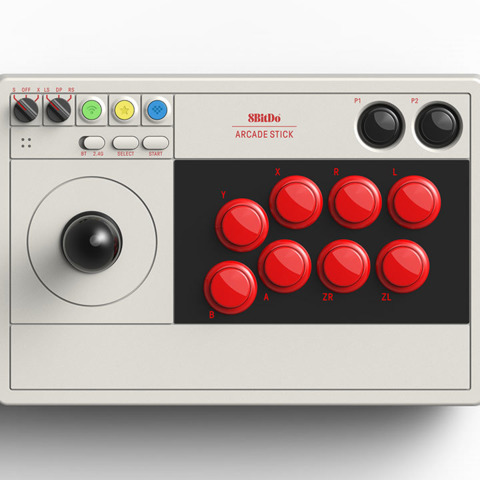 According to 8Bitdo, its arcade stick is also "ultra-moddable." The company notes that it is designed with a universal joystick plate, making it compatible with a wide number of parts.

The 8Bitdo arcade stick also comes with Home and Screenshot buttons, a 1000mAh rechargeable battery, and turbo functionality as well as a toggle switch that changes the joystick control between the D-pad and the analog sticks.