Plus, he has some adorable costumes!

A demo for Yoshi's Crafted World is now available on Nintendo Switch. During the February 2019 Nintendo Direct (see all the news from it here), the company announced the demo with a short trailer that also showed off some gameplay and a preview of Yoshi's adorable costumes.

Nintendo didn't specify exactly what today's new demo will include, but the trailer featured Yoshi rafting, racing solar cars, and flying a plane. It also detailed how you can use in-game coins to craft cardboard costumes for Yoshi, which function like armor. This includes a Nintendo Labo-themed outfit in the shape of the piano.

Yoshi's Crafted World was first revealed during E3 2017. It appears to play similarly to previous Yoshi games and features a perspective-shifting mechanic in a cardboard diorama-like world. It is set to release on Nintendo Switch on March 29.

Nintendo opened the Direct with the announcement of Super Mario Maker 2 for Switch. The company also announced Fire Emblem: Three Houses' release date and gave more details about the game in an extended trailer. 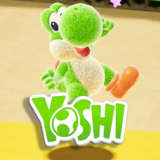