Players can hear their favorite Nick characters talk smack as they lay the smack down.

A long-awaited update for Nickelodeon All-Star Brawl is finally live, as voice acting for the entire playable roster has been added to the game free of charge.

The update includes multiple voice lines for every character in the game, delivered by the series' voice actors for the characters: Tom Kenny voices SpongeBob, Frank Welker is Garfield, and Billy West voices both Ren and Stimpy, among others.

We hope everyone enjoys the impeccable voice talent that these incredible individuals are able to bring to the table: pic.twitter.com/oRwGNtKQK9

The free update also adds items to the game, which players can add to spice up a battle. The item list includes a Krabby Patty, a Reptar toy, Log from Blammo!, and more. The update comes one day before Nick All-Star Brawl joins the PlayStation Plus lineup of free games for the month of June.

Both voice acting and items are available now for the PC, Xbox One, and PlayStation 4 versions, with the Nintendo Switch version update "coming soon." The previous update saw Jenny from My Life As A Teenage Robot added to the playable roster, along with news that Hugh Neutron--Jimmy Neutron's dad--and Rocko from Rocko's Modern Life are also coming to the game. 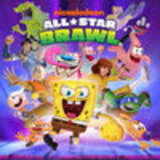