The Metal Slug series is coming back, this time on mobile devices, and it's being developed by Pokemon Unite studio Timi.

The Metal Slug series has been missing in action for more than a decade, with ports and re-releases the only mainline games fans of SNK's run-and-gun franchise have had to get excited about. That's changing soon, however, as SNK and developer Timi Studios are currently working on a new entry for mobile devices. Somewhat surprisingly, the game actually looks like it could stick to what make the classic Metal Slug games so popular.

Metal Slug Code: J, which is only a working title for the game, is a sidescrolling shooter like the rest of the series, and it has virtual buttons on the screen as well as an analog stick to handle shooting, aiming, and movement, along with other actions. In a game as frantic as Metal Slug, it remains to be seen if this will be effective, but the art style and music both appear to be spot-on for the series.

Vehicles are also available, giving extra firepower and armor when you come across one in a level, and this will be necessary for dealing with some of the game's more powerful bosses.

While a mobile game might not be exactly what Metal Slug fans were hoping for, developer Timi Studios does have a good track record. It previously co-developed Call of Duty: Mobile and is currently working on Pokemon Unite, the recently-announced MOBA for Nintendo Switch and mobile.

Metal Slug Code: J doesn't have a release date yet, but you can check out the announcement trailer above. Several of the original games are available on Nintendo Switch. 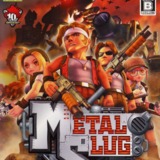