The popular Japanese wrestling series is coming to the Game Boy Advance, and we have new shots of the US version in action.

Bam Entertainment has released new screenshots from the US version of Fire Pro Wrestling, the Game Boy Advance version of its popular wrestling series. Not associated with any US wrestling organization, Fire Pro Wrestling will feature more than 150 unique wrestlers with their own fighting styles and finishing moves. The game will also feature the series' popular create-a-wrestler mode, which allows players to create and save up to 66 wrestlers on their cartridge. The game will have seven match modes, and it can even be linked up with other GBAs for a four-player battle royal mode.

Fire Pro Wrestling will be available at the GBA launch on June 11. 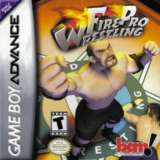