Someone spotted the Mario Party: Star Rush box art on a can of pasta.

Mario Party: Star Rush was recently announced with a bunch of new features, but there's something about it that doesn't seem very new at all: its box art.

Twitter user Starwindbliss spotted the new Mario Party's box art on a can of SpaghettiOs. Funnily enough, the Star Rush box art even has a grey-and-white checkered background, which is commonly shows up in Photoshop when a background is transparent. You can see the comparison shot for yourself below.

I can't believe that Nintendo recycled the art from a Spaghetti-O's can pic.twitter.com/l9u1DHkBHz

The last 3DS Mario Party game was Island Tour, and it received a score of 7 in GameSpot's review. Critic Heidi Kemps concluded, "It's not a perfect party by any means, but some good design considerations, better-than-average variety, and always-enjoyable Mario thematics put Mario Party: Island Tour a few notches above your average video game bash-in-a-box."

You can see some of Nintendo's E3 announcements, including the reveal of a brand new Legend of Zelda game, through the links below.

To keep up all of the news and impressions from E3, head over to GameSpot's event hub now. 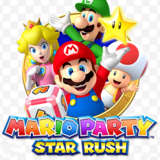